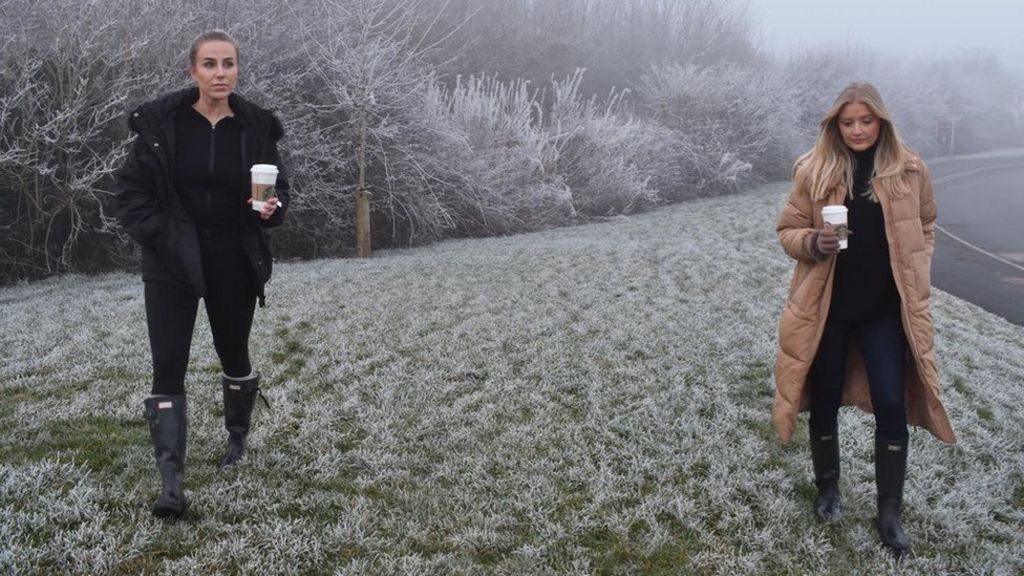 Two women have described how they were surrounded by police, read their rights and fined £200 each after driving five miles to take a walk.

The women were also told the hot drinks they had brought along were not allowed as they were “classed as a picnic”.

Guidance for the current lockdown says people can travel for exercise as long as it is in their “local area”.

The police force involved, Derbyshire Police, said driving for exercise was “not in the spirit” of lockdown.

One of the would-be walkers, Jessica Allen, assumed “someone had been murdered” when she arrived at Foremark Reservoir on Wednesday afternoon.

“As we drove in there was a police van, a police car, and there were loads of police there,” said Ms Allen, who lives in Ashby-de-la-Zouch in Leicestershire.

“I genuinely thought someone had been murdered; the place is normally so quiet. The next thing, my car is surrounded. I got out of my car thinking ‘There’s no way they’re coming to speak to us’. Straight away they start questioning us.

“One of them started reading my rights and I was looking at my friend thinking ‘This must be a joke’.

“I said we had come in separate cars, even parked two spaces away and even brought our own drinks with us. He said ‘You can’t do that as it’s classed as a picnic’.”

Her friend, Eliza Moore, said she was “stunned at the time” so did not challenge police and gave her details so they could send a fixed penalty notice.

“Just seeing a police officer anyway is quite scary for some people and we were really not expecting to be approached and to be told we were doing something wrong,” she said.

“We don’t want to get away with it if we have broken the rule, but it seems a bit unfair that you can be fined on something that’s so vague.”

Guidance issued by the Cabinet Office

states that people can leave their homes for exercise but should not travel outside their “local area”.

However, the actual legislation does not specify a maximum distance

that people are allowed to travel for exercise.

Both the guidance and legislation state people can exercise with one other person, as Jessica Allen and Eliza Moore did.

Human rights barrister Adam Wagner said: “There is no law against travelling to exercise. The guidance is not legally binding and the police have no power to enforce it unless it is reflected in the lockdown regulations which in this case it is not.”

Derbyshire Police said: “It is up to each individual officer on a case-by-case basis to decide what is reasonable as the legislation does not proscribe a distance.”

The BBC contacted the Cabinet Office, Home Office, College of Policing and National Police Chiefs’ Council to ask for clarification over what they define as “local area” in relation to exercise. None could clarify this.

However, the College of Policing said: “In overall terms police officers across England and Wales will be using their discretion and professional judgement about whether or not someone has a reasonable excuse for travelling for exercise and being outside the place where they are living.”

Ms Allen said she is taking the pandemic “very seriously” as her brother is a doctor working on a Covid ward in London, and her parents have both had coronavirus.

She said she drove to the reservoir as she knew it would be less crowded than near her house.

“I’m self-employed but my business is closed and I’m trying to fill my time,” she said.

“I suffer from anxiety and when you go by the water you feel so much better. The only thing I’ve got to look forward to is planning a walk with my friend.”

Ms Allen said the experience was “very intimidating” and had left her feeling scared of police in general.

“I was so shook up afterwards,” she said. “The fact they read my rights. I thought ‘Am I going to prison for going on a walk?’

“I’m not a criminal but we were treated as if we were criminals and it really made me feel for those people who are wrongly arrested and questioned by police, because it wasn’t a nice situation to be in.”

Derbyshire Police said in a statement: “Driving to a location – where exercise could easily have been taken closer to a person’s home – is clearly not in the spirit of the national effort to reduce our travel, reduce the possible spread of the disease and reduce the number of deaths.

“Each officer will use their professional judgement on a case-by-case basis, however, people should expect to be challenged and understand the clear reasons why they may be asked about their movements given the critical situation the NHS currently finds itself in.”

Andrew Bridgen, MP for North West Leicestershire, said he regarded the reservoir as a local area.

“I’m concerned that my constituents are facing fines from Derbyshire Police for taking exercise in what I would class as the local area.

“It is important that common sense is used when enforcing guidelines, and a fine rather than issuing guidance appears to be rather over zealous.”

One man said his parents were given a fixed penalty notice after driving seven miles to Calke Abbey from their home in Whitwick, Leicestershire.

“Upon approaching the park there was a team of police officers so my parents decided to pull in and check that no laws were being broken,” he said.

“Immediately they were hit with a £200 fine. When my parents said that they weren’t aware this was too far and they’d go home immediately, the police officer simply said ‘It’s too late’.”

When asked about this, Derbyshire Police said: “The four Es are still in use, however, where there are cases of blatant breaches of the regulations then fines will be issued by officers.”

During the first lockdown, the force was criticised for releasing drone footage of people walking in the Peak District

Speaking at the time, Lord Sumption – a former Supreme Court judge – said it was “disgraceful” and “shamed our policing traditions”

. Send your story ideas to